I decided that this year I would take part in the RSPB’s Big Garden Birdwatch. For one reason or another, it is something that has passed me by the past few years. But this year it was time to make an effort.

As my garden would only have one count – neighbours cat sat at gate – I thought I would do my count at the wildlife garden of the charity I  volunteer with. When they got wind of this, they offered me tea and toast for a copy of the results. As you can imagine I agreed to the exchange!

Being trapped in an office during the winter months is all types of cruelty to the outdoors type of person; sat looking longingly out the window during daylight hours, only to watch them fade to night as your working day draws to a close. With my birthday being last Thursday I negotiated a shorter day, only by an hour, but it time enough to meander homeward through the fields in daylight!

Redwings danced from berry laden branch to berry laden branch. The pathway I walked was surrounded by their high pitched tseep calls, but all of them were just out of clear shot of my camera… almost as if they were camera-shy! Though I have a very early record of a Redwing flock in September, this flock brought with it a feeling that winter was finally arriving, albeit about 3 months late!

The Great tits, Blue tits and Longtailed tits that danced and bounced through the trees, stopping to eye me carefully before continuing on their merry way, were the last little delights of that pathway. From there my walk took me through open fields, Wood pigeons, Crows, Magpies could be seen flying in the distance. A Robin saw fit to sing to me as I passed a lone bit of scrub.

As I neared the edge of a housing estate I spied a Dunnock, tail pointed up and wings pointed out, darting from branch to branch along a garden hedgerow whilst calling to a more cautious, intrigued and less ‘showy’ individual. The display continued for quite some time, and moved to the low branches of a nearby wood. It was there that a third party started to follow!

I continued down the path; to one side an open field with the occasional landscaped patch of young trees, while on the other side were houses, their rooftop aerials covered in Starlings which cracked and whistled away to each other. I still find myself surprised at the size of a Starling; they’re not small birds at all!

I decided to take a closer look at a gathering of birds settled at one of the ‘plantations’. A few Redwings sat in its centre but departed as soon as they felt I had gotten too close, but the Chaffinches and Goldfinches remained. One Chaffinch saw fit to sit up on a branch and chink! to the world, while the Goldfinches sat at the very highest branches and wittered to themselves! 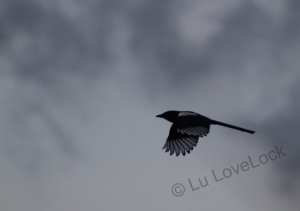 My walk drew to a close, but before it did I spotted two Magpies – for joy! One sat amongst some trees while the other flew in from some distance away to join its companion. They sat quite happily side-by-side for a few moments before departing together.

I arrived home with a smile on my face. An hour-long walk filled with all sorts of delights! I wonder if I can leave work early more often?